The Facts About Animal Testing 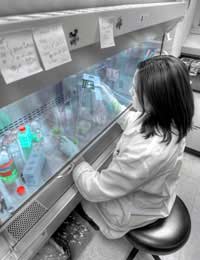 Animal testing is a hot political subject and there seem to be very few grey areas – for most people it’s a real black and white issue. Either you feel it’s unethical to use animals to test products, or you don’t.

Animals have been used in scientific tests for decades; whether it’s the USSR sending a dog in the first earth orbit, or rabbits being skin tested for sensitivity to cosmetics. The use of animals to test products still goes on today – especially in the pharmaceutical industry where medicines are routinely tested on animals.

The question of whether medical testing is ethical is an extremely hard one to answer. They may have helped save millions of lives, and for those of us who need to take medicines, we have little control over whether those medicines are tested on animals. British law decrees that all medicines released onto the market must be tested on at least two different types of live mammal.

The same is not true, however, when it comes to testing cosmetics, cleaning products and other domestic wares on animals. There is little need to test products on animals these days, and many companies now have a green, organic, or eco friendly policy that refrains from testing on animals, even if their products are dermatologically tested.

Typical animal tests for domestic products include The Draize Test. Usually carried out on rabbits; this test involves dripping the test substance into one eye. The eye is then checked over the course of several days for redness, ulceration, swelling, bleeding or discharge.

Another common test is the Skin Irritancy Test. A section of the animal’s skin is shaved and the substance is applied. The area is observed for signs of redness, swelling or cracking. The animal is restrained to prevent them from licking the area.A third test is the Acute Toxicity Test where a large dose of the substance is administered either down the throat or injected under the skin of the animal to watch for signs of poisoning. Many animals die as a result.

Several different animals are used in the tests. Rats and mice are very common, also rabbits and guinea pigs. Dogs and monkeys are also frequently used. Other animals known to have been used for testing are cats, fish, birds, pigs, horses, sheep and hamsters. It is thought that more than 100 million animals worldwide are involved in tests each year. In the European Union, more than 10 million animals are experimented on annually. Many more animals are bred for research purposes but ultimately killed as being surplus to requirements.

Whilst products that will come into contact with human skin do have to be demonstrated to be safe, it is not the case that animal testing is required. The stipulation for companies is to provide data that illustrates the safety of their product, but this can often be shown from previous tests. Since very few chemicals in most household products are brand new, they will all have been tested in the past, and therefore data is available proving their safety. Even where a product contains items that need testing, scientists know enough about the ingredients of the product that very sophisticated computer mapping programs can run simulations based on our existing knowledge of reactions. It is also possible to run tissue and cell tests in laboratories that will demonstrate more effectively the likely response of human skin to a product. In the majority of cases non-animal testing is a viable alternative.

Some manufacturers have begun to make ‘green’ or ethical products that are not animal tested and will say so on the packet or bottle. Alternatively you can check the company’s animal testing policy on their website. The BUAV (British Union for the Abolition of Vivisection) which has been operating for more than 100 years and has a very sensible anti vivisection policy, holds a lot of information about animal testing and is a good port of call if you would like to know more. They have a list of companies and products you should avoid if you would like to only buy products that have not been tested on animals. They offer certificates to companies and products that comply with their standards, and a BUAV mark is a sure sign the product is ‘safe’.

Some companies operate a policy called a ‘fixed cut-off date’. This means that they will only source ingredients for their products that have not been animal tested, or, where it is impossible to do so, the ingredient was not tested after a certain date – usually 20 years or so. There is also a policy known as the ‘five year rolling rule’ which means all ingredients within the product have not been tested within the last five years, however BUAV does not support this as a means of preventing animal testing.

How To Identify Animal Free Cosmetics
Share Your Story, Join the Discussion or Seek Advice..
This is quite saddening to read, as I can't stand the idea of animal testing myself.My daughter is especially passionate about it, as she wants to be a veterinarian when she grows up.She recently joined a stop animal cruelty initiative at school and spends all her time with it! I really liked this article though, extremely informative and unbiased.It gives a real perspective into what animal testing is, how it's done, and what the alternatives are.
Emma - 1-Oct-12 @ 5:07 AM
Excellent website. I'm a scientist. This website will help lots of people.
Science Genius - 16-Sep-11 @ 6:47 PM
This is a good website that helped me at school!
Courtsman! - 18-Mar-11 @ 2:55 PM
Title:
(never shown)
Firstname:
(never shown)
Surname:
(never shown)
Email:
(never shown)
Nickname:
(shown)
Comment:
Validate: