Home > Animal Free Food > Are all Cheeses Suitable for Vegetarians? 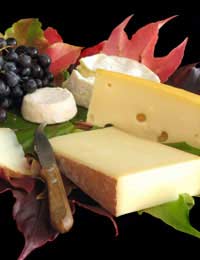 The vegetarian diet is full of variety, colour, flavour and texture, and with many meat substitutes now available, there are even now more food choices for the average vegetarian. But there are some seemingly innocuous foods that may actually contain animal products, one of these being cheese.

What is Vegetarian Cheese?

As a dairy product, cheese can be classified as an animal product, as it is made from the proteins and fats in animal milks. There are literally thousands of varieties of cheese that are made from the milk of cows, sheep, goats, and buffalo, each with their unique taste and texture. Part of the cheese making process usually involves using a coagulant, an ingredient that sets the cheese to the desired firmness.

It’s this process that usually uses the non-vegetarian-friendly ingredient called rennet, which can be present in almost any type of cheese, from cheddar to parmesan (parmigiamo-reggiano). These cheeses can in turn make their way into other otherwise vegetarian-friendly foods, such as pesto, savoury snack flavourings and sauces.

Rennet is made up from complex enzymes that are found in the stomachs of mammals to digest the mother’s milk, with the primary enzyme found in rennet is known as chymosin.

In cheese making, rennet is used as a coagulant, as the enzymes naturally cause milk to separate into curds (solids) and whey (liquid). One of the most common sources of rennet is from the fourth stomach chamber (the abomasum) of young unweaned calves – the availability of these stomachs as a bi-product is largely down to the veal industry, although it is also found in the stomachs of piglets too.

Parmesan and other hard cheeses may exclusively be made with animal-based rennet. In European law, real Parmesan cheese (in Italian, "Parmigiano-Reggiano) has a protected designation of origin, meaning that only this type of cheese produced in specific areas of Italy is permitted to use this name. Since Parmesan cheese follows a specific recipe, part of which includes calf rennet from dairy cows in this region, no real Parmesan cheese or it’s close ‘cousin’ Grana Padano will be vegetarian. Other hard cheeses resembling Parmesan, often listed as ‘hard Italian’ cheeses, may be suitable for vegetarians if labelled as such.

But sources of rennet in cheese making are not purely animal-based. It is thought that a number of plant-based coagulants have been used throughout history in place of mammalian-based rennet – these include enzymes from mallow, thistle (specifically cynara, a popular alternative rennet source in the Mediterranean), nettle and fig juice.

Natural acids can also be used as milk coagulants, with citric acid often used to separate the curds and whey in the production of soft cheeses such as paneer and cream cheese.

Contemporary sources of alternative vegetarian rennet can come from a number of vegetable and microbial sources. Thistle-based Cynara rennet is a popular vegetarian substitute used in industrial cheese making, as is microbial rennet, enzymes produced from mould bacteria, via a fermentation and purification process. These types of microbial rennets are vegetarian as long as they’re not ‘fed’ (alimented) with animal-based products. It’s also worth noting that a number of food safety organisations, such as the European Food Safety authority have currently denied Qualified Presumption of Safety (QPS) status to enzymes produced by moulds in this process.

In this process, the cymosin (the main enzyme in rennet) DNA is taken from the stomach cells of a calf, and altered so that it can be reproduced. Whist the cheese itself will not contain a genetically modified organism (such as Aspergillus niger), it does use the enzyme from this process.

Alternatively, GM rennet can also be bio-synthesised without animal cells, but this is not always made clear on the vegetarian cheese labelling. In this case, your only option is to contact the manufacturer directly and ask them to disclose the source of their vegetarian rennet.

If there is no indication that your cheese is vegetarian on the packet or deli label, then you should assume that it contains animal-based rennet. There are many brands of popular firm cheeses (such as cheddar), that are now cited as ‘suitable for vegetarians’, although as above, you may wish to contact the manufacturer to verify the source of the vegetarian rennet.
Next Page